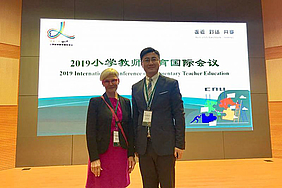 Professor Dr. Esther Brunner was invited to talk at an international conference on the topic of Involving, Dialoguing, Sharing at the Elementary Education College at the Capital Normal University (CNU) Beijing in October. The occasion marks the twentieth anniversary of the college. The university is a partner university of the Thurgau University of Teacher Education. The cooperation between these two universities facilitates exchanges for both students and lecturers.

The conference was opened by the president of the CNU and the director of teacher education at the Department of Education, Peking. Eighteen international experts were among the invited speakers. Esther Brunner highlighted the profile of primary school teachers in German-speaking Switzerland, and the fact that they teach up to seven or eight different subjects.
She took the example of mathematics and explained which prerequisites must be present in order to teach the subject at primary level, and how this is achieved via the degree courses at the Thurgau University of Teacher Education. Teachers in China usually teach one specific subject from the first class of primary school.
The question is currently being discussed at the CNU and at other Chinese universities also, whether expert knowledge of maths suffices to successfully teach maths, or whether didactic competences are also necessary.

Nurturing international partnerships
In between the intensive lectures, there was sufficient opportunity for Esther Brunner to meet both former and future exchange students at the CNU. Professor Brunner met with the two Chinese students who are coming to the PHTG in spring semester 2020, as well as talking to the students who already have been to the Thurgau University of Teacher Education. There was also the chance to lead intensive discussions with the English teachers at the Elementary Education College CNU.

Education in a changing world
Prior to the conference, Esther Brunner had the chance to attend a maths lesson in a Chinese primary school, thanks to the support and interpreting skills of a Chinese PhD student. Professor Brunner discussed the maths lesson with the teachers after the lesson. It became apparent that it is no longer adequate to learn contents off by heart and to chant them like in a choir, as was the case in China up until a few years ago. Both teachers and pupils in China today have to be able to apply their knowledge to solve problems. Esther Brunner received a hearty welcome at the school, as she did in all other places she visited. The school directors gave Professor Brunner a guided tour of the school campus.
Cultural exchange is every bit as important as professional debate. The Chinese education system functions differently to the Swiss system. There are clear discrepancies in environment and conditions. The same is true for teacher education in China. Comparing the two education systems serves as a mirror to critically reflect on and to evaluate our own structures.